Two of the legacies that I have from my dad

are a love of fishing and of gardening. Many of his friends would readily recognize the first and be astounded at the second. But for several years as a kid my dad and we kids maintained a large garden at home. Large enough so that my Mom took up canning, putting up dozens of jars of pickles and tomatoes and spaghetti sauce. It was from Dad that I learned about composting, about putting a fish carcass under corn and squash hills (which we of course got from the local lore descended ultimately from Squanto, that Catholic-Indian savior of the Pilgrims).

And both activities, fishing and planting have often given me what I hope are decent insights into many of the parables of Christ, and a definite feeling of closeness with the original disciples and apostles, who were, for the most part, men of the earth and seas.

But gardening is a topic especially appropriate for this blog. This year I added yet another vegetable bed to our gardens. One bed has pole beans and bush wax beans (and so far the pole beans have escaped the scourge of the Mexican bean beetle, which devasted my crop the last time I planted them), another to herbs and cucumbers.

In the front yard, an 8 x 8 bed holds tomatoes and peppers. Another bed has purple eggplant and a rainbow of Swiss chard. A third bed has tomatillos, and spaghetti, crookneck and zucchini squash, as well as sunflowers. And this year I dedicated two boxes to corn. 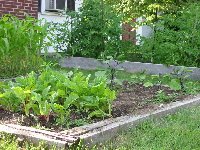 I've always thought that it was a great waste to own property, but not raise food. Aquinas posited that property is proper to man, and that because it is necessary to the maintenance of human life, at least of the civilized variety, and good order among men. And that so directly contributes to the maintence of life than the provision of food. In America today, where less than 2% of the population is engaged in farming, it can be far too easy to forget that food is the product of human labor, and not just a commodity to be purchased with money.
Posted by Steve Cavanaugh at 8:24 AM No comments: