2012 Resolutions!
Well, yes, it's been forever since I posted, but my resolution is to post more often in 2012 and to take advantage of some soon to come free time to do some more writing, blogging, and, perhaps, even thinking!
We have had the most incredibly mild winter this year, with days in the 80s in March! So, I have finally made good on a long-standing desire to get my Spring vegetables in the ground early; on Good Friday I planted several seeds in a starter kit I picked up at Home Depot. This is an old English tradition (see here and here), but I've never done it. 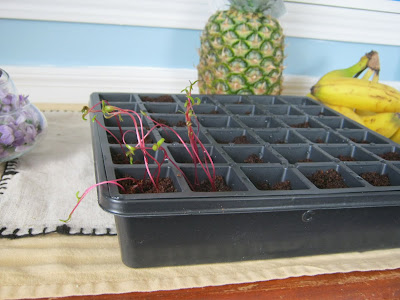 Swiss chard, sprouted after a Good Friday planting.
I also built new frames for two of my garden boxes, and started clearing the weeds so I could put some new soil in the boxes. The box on the left is already planted with peas, lettuce and beets, and I'll plant more peas and carrots in the second box this weekend. 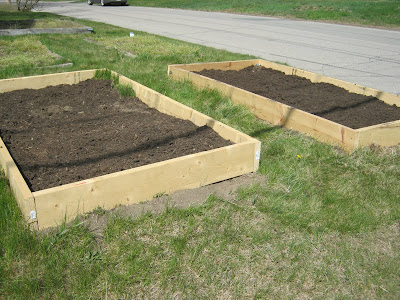 This weekend we are enjoying the unique Massachusetts/Maine April long weekend (Patriots' Day, celebrating the stand at Concord and Lexington by the Minutemen), the origin of which is recalled in the Longfellow poem "Paul Revere's Ride":

Listen my children and you shall hear
Of the midnight ride of Paul Revere.
On the eighteenth of April, in Seventy-five;
Hardly a man is now alive
Who remembers that famous day and year...

of which you can read the full version here.
So, today I finished filling the second rebuilt box with soil and did some cleaning up in some of the other backyard boxes and have had a delightful couple of hours with my hands covered with dirt. One of the benefits was while cleaning out our herb box of various detritus from last season; the thyme and oregano and a bit of parsley have already come back, and the smell of the fresh oregano was simply wonderful. ¡Muy sabroso! as we would have said in Colombia. 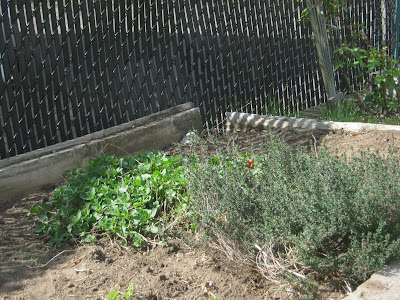 Parlsey (lower left), Oregano (left), thyme (right)
One of the great things about gardening, especially with a front yard garden, is that in addition to being able to work outdoors and feel the sun on my neck, I get to meet and chat with neighbors. On Good Friday I met two of my younger neighbors who were intrigued in equal measure by me working in the dirt and our cat Purrfect supervising my labors. Today the young man stopped by to say hello, and having learned he's a hockey player, I offered him our street hockey equipment, which sadly gets no more use. He rode off on his bike to check with his mom, and when he arrived saying he had her permission, I walked up to their house with half a dozen street hockey sticks and a goalie stick and met his mom.
It's not Mayberry, R.F.D., but it's a far sight better than A Clockwork Orange.

Posted by Steve Cavanaugh at 1:43 PM No comments: