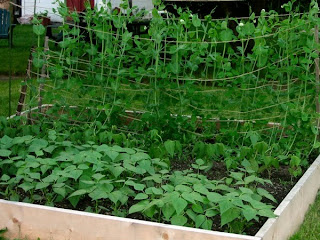 No specific date, just a summing up. We had 18.3 inches of rain in March, the wettest on record. Many areas in our town and throughout New England were flooded; the water table rose so high that our basement flooded twice.

The snow drops and crocuses bloomed in early March. Unfortunately, the crocuses in the front yard only had a few days of beauty before the storm at the Ides of March ruined the flowers; they were beaten down and waterlogged, and not at all a pretty sight.

By the end of March the forsythia bushes were in bloom, as were the daffodils in the front yard. 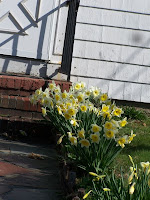 Easter was early, but we were able to festoon our dining room with daffodils and forsythia from our own yard. The rains of March did not continue into April, and it has been a mild, fairly dry month.

April 20, 2010
Swiss chard and oregano that Laurie planted in the herb garden last year have returned. The chives, which we first acquired with our cabin in Vermont in 1987 have returned as well.

April 24, 2010
My first planting of the season. I prepared the square bed in the back yard and planted romaine lettuce, rhubarb chard, Fordhook chard and rocket.

April 25, 2010
I dug out one of the front rectangular plots and planted peas. There were LOTS of grubs in the soil, which I disposed of organically, by crushing the disgusting little creatures heads.

May 26, 2010
Today was replanting the square bed in the back yard which the neighborhood stray cats used as a litter box; I planted the same vegetables as before, and covered with netting and slats to keep the furry little buggers out! I also cleared out two of the garden boxes on the east side of the house.

May 29, 2010
The last two boxes of the east side boxes have been cleared, and the strawberries have been weeded. I went to Lambert's to purchase seedlings: two types of tomatoes, two types of peppers, eggplant, two types of cucumber, zucchini and yellow summer squash.

May 30, 2010
Laurie and I weeded the raspberry patch, and I planted beans (green and wax bush beans) in one of the front plots. After the sun cooled down a bit, I planted the tomatoes, the ancho peppers and two eggplant, along with the cucumbers in the large box on the east side of the property. I made rings out of newsprint to protect the seedlings from cutworms; there are plenty of those and grubs in the ground around here. I kill as many as I can, but I don't like to use poisons on vegetables, so the ground remains untreated. The only insecticides I use are Bug-B-Gone on the lillies and roses, as there's some noxious red beetle that strips them bare without the spray.

July 2010
July 18, 2010
The garden has had some great successes so far this season, and some unexpected disappointments. The eggplants (a new variety this year) have not grown much at all; the plants have not even doubled in size since we put them in. The hot and Italian peppers have been hit by some sort of insect, which has stripped away many of the leaves and has retarded the growth. I've never seen hot peppers attacked this way. The basil in the herb garden has also been ravaged by beetles. We've been trying to keep the bugs off by sprinkling with cayenne pepper, which seems to have helped a lot.
However, there has been lots of good news too! The cucumbers (two types-a long salad cucumber, and a stubbier pickling cucumber) are doing great! 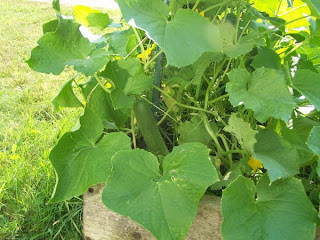 The tomatoes are also doing well, and the first of the cherry tomatoes is ripening. We've also had great luck so far with both yellow squash and zucchini...no sign so far of the leaf and stem rot that usually plagues us. We'll have to make zucchini bread today to use up the excess! We've also been putting the yellow squash (sliced thin, without seeds) into salads, which add a nice color and snap. 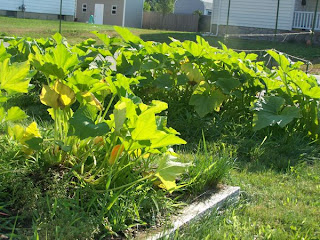 I harvested the first of the green and wax beans today, and we should have several weeks of those to look forward to. I should plant some more now so we'll have some for the Fall. Perhaps on Tuesday when I have a day off. 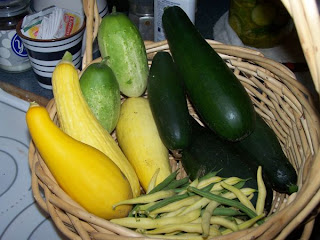 We can also start harvesting arugula (rocket) and chard soon. Lambert's will have to do without our business for the next couple of months :) 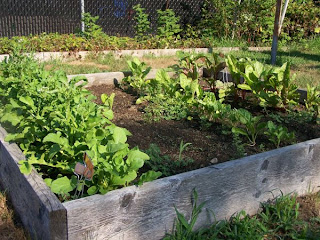 Today I made ice-box pickles (bread and butter) for the first time. If these come out well (they look OK!) I'll post the recipe. 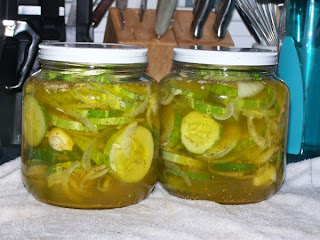 Well, the pickles came out great! Here's the recipe.

Slice onions and pickles thin, pack in jar(s). Heat vinegar to dissolve sugar. Stir in spices. Pour over cucumbers and onions. Cover, Store in refrigerator. Makes 1 gallon. Can be eaten after 24 hours.

I also made a batch of dill pickles. These came out nice and crispy, and the garlic flavor was strong but not overpowering.

4. Refrigerate pickles. Shake jars once a day for 7 to 10 days to redistribute seasonings and blend flavors. Store in refrigerator up to 2 months.

October 2010
October 4, 2010
Back in the last week of August, I pulled out all the strawberry plants, which have not been producing much, added some more top soil and composted humus/manure and planted cucumbers, zucchini and green beans. For some reason, only about half the green beans came up, and most of those got eaten. I think I have 4 plants left.

However, the zucchini and cucumbers have been growing steadily, and there are now blossoms on the squash and I've had to put up some stakes and string for the cucumbers to climb on. The cukes also have some buds and a few tiny cucumbers are in evidence. So we may yet get a few more of those veggies from the garden.

The tomatoes are still producing slowly, and I have a nice batch of ancho peppers ready to pick. I'll have to make a pot of chili for the weekend.

October 9, 2010
Finally, after a week of rain (Sunday night through Thursday), we have beautiful Fall weather: temps in the 60s, a deep, bright blue sky, and a light breeze. I spent most of the day painting the house, but did spend some time afterward inspecting the garden and picking some green tomatoes so they can ripen inside, unmolested by the insects. And finally, some photos. Lots growing for October! 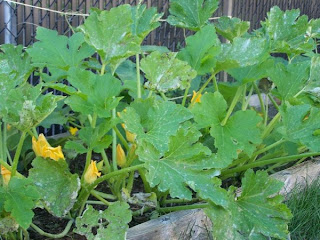 Zucchini...all male flowers so far, but
we can at least count on having some squash blossom
fritters! 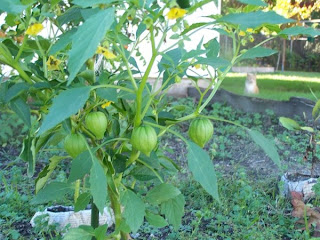 Tomatillos: I planted these about 6 years ago;
every year some come back, although I have never planted
them since. This may be the last year, however, as there
are only about 6 plants, and they may not get to drop any
fruit this year. 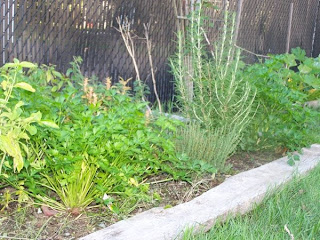 The herb garden is still going strong: parsley,
thai basil, rosemary, oregano and sweet basil. Laurie
has been making batch after batch of pesto with the basil. 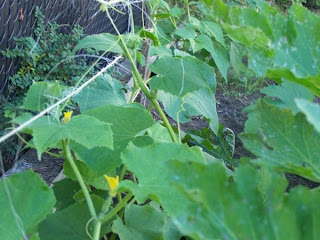 The cucumbers are up to the third level
of the strings I put up to help them climb, and
there are small cucumbers at the end of the many
buds, so we may at least get some gherkins out of
this :) 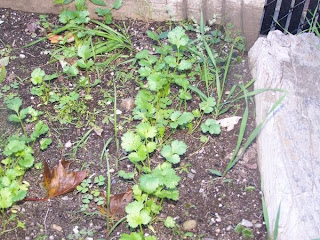 I planted cilantro in the herb garden
to go with the peppers and tomatillos. All set
for some nice warming chili. 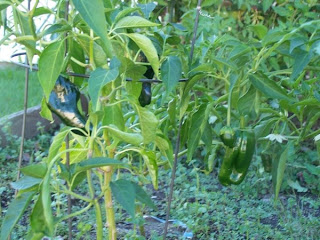 Here are some of the ancho peppers,
ready for the chili I'll make this weekend.