Knowledge is knowing a tomato is a fruit; Wisdom is not putting it in a fruit salad.

from my friend Theresa
Posted by Steve Cavanaugh at 10:17 AM No comments:

Much of the food that much of the population eats, even when billed as "Home Cooking", is really industrial food, and the way it is prepared and presented often is influenced more by how this can be done more cheaply for the manufacturer and how it positions the manufacturer vis-a-vis its competitors.

This competitive aspect leads to a homogenization of products; if products are very different, it's harder to compare them. A recently published article in The Washington Post makes this point about clam chowder:

Who put the flouwah in my chowdah? The thick and thin of consumer conformity
by Steven Pearlstein

One of my earliest childhood memories is sitting barefoot and shirtless on a stool at a lunch counter a block from the beach in Ogunquit, Maine, gulping down a bowl of clam chowder.

There was nothing particularly special about the chowder — it was pretty much like what you would have found anywhere along the New England seacoast: a generous mound of potatoes, onions and clams sitting in a broth of briny clam juice and whole milk. As often as not, there would be butter and paprika floating on the surface, with a few grains of sand sitting harmlessly at the bottom of the bowl.

Half a century later, however, a summer visitor to New England is hard-pressed to find such authentic chowder. Although omnipresent on menu boards in restaurants and seaside shacks, what passes for clam chowder now is most often a bowl of flour-thickened gruel in which tiny bits of chopped sea clams and overcooked potatoes wallow...
read the rest at The Washington Post.

Similarly, the way food is served is influenced by these financial and business interests. What is a meal? Well, it is a meat, a starch, and a vegetable, as if even in adulthood we were all eating off a divided plate or a TV dinner tray. Of course, a meal can be much more than that, in any number of different dishes; but by conforming our own table to the advertised format, we are easier to sell to. Dare I say, manipulated.

Last night's dinner was black bean empanadas with three different salsas and guacamole. It was delicious, nutritious and filling! Only one of the salsas (the tomato one) was purchased; Laurie made the watermelon salsa and the mango/cucumber salsa, and I made the guacamole. Some of the ingredients were from our garden, which right now has a lot more to do with determining what we're cooking and preparing for dinner than ads or newspaper features. Which has a certain rightness to it, no? 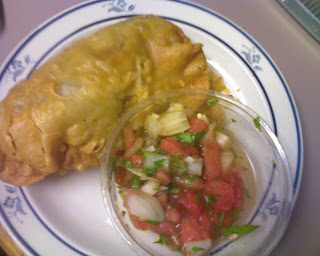 Posted by Steve Cavanaugh at 10:58 AM No comments: