Our garden continues to grow, and the promise of fresh provisions, a mere wisp of hope a few weeks ago, is growing more and more concrete. Here are some photos from last night.
Tiny cucumbers adorn the vines which are climbing up chicken wire. Meanwhile, there's plenty of blossoms on the yellow squash, but no squash so far. 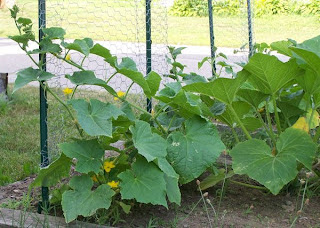 There are lots of small peppers and tomatoes on the vine too. Quite a difference from just a month ago. 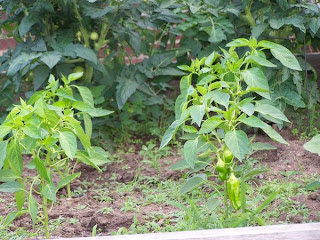 Tomatillos and chard. I planted the tomatillos about 5 years ago. They keep coming back. We've been getting ready for the harvest by collecting recipes for mole. 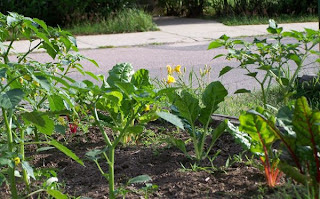 The first eggplant has shown up, so we'll be having baba ganoush soon! 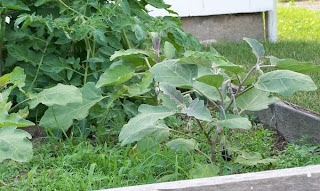 And tomorrow should be our first zucchini of the season (although you can't see it because it's hidden beneath the leaves). 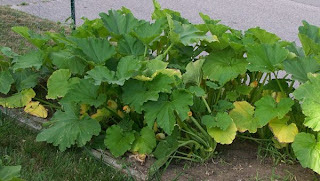 Our pole beans are already far taller than I am (the poles in the foreground are over 6 feet above ground). 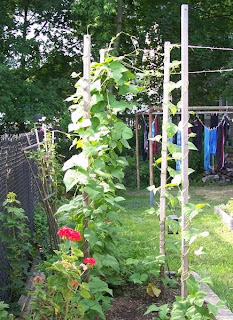 Pretty as all the vegetables are, there are flowers around the yard too. Here are our glads. 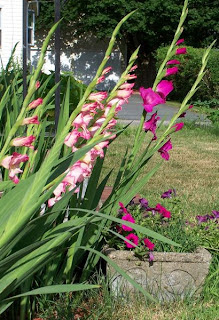 Hues leaping heav'nward,
As roots, anchors in the soil,
fix them in the breeze

Finally, in the matter of drink, St. Benedict has the following to say:

Of the Quantity of Drink, Chapter 40

"Every one hath his proper gift from God, one after this manner and another after that" (1 Cor 7:7). It is with some hesitation, therefore, that we determine the measure of nourishment for others. However, making allowance for the weakness of the infirm, we think one hemina [about 10 ounces] of wine a day is sufficient for each one. But to whom God granteth the endurance of abstinence, let them know that they will have their special reward. If the circumstances of the place, or the work, or the summer's heat should require more, let that depend on the judgment of the Superior, who must above all things see to it, that excess or drunkenness do not creep in.
Although we read that wine is not at all proper for monks, yet, because monks in our times cannot be persuaded of this, let us agree to this, at least, that we do not drink to satiety, but sparingly; because "wine maketh even wise men fall off" (Sir 19:2). But where the poverty of the place will not permit the aforesaid measure to be had, but much less, or none at all, let those who live there bless God and murmur not. This we charge above all things, that they live without murmuring.

Naturally, people entering a monastery bring with them habits and expectations that they formed while living in the world. And while some of the vows that monks traditionally take (not the three evangelical vows of the friars, i.e., poverty, chastity and obedience) are obvious such as obedience and stability, that of conversion of life is the furtherst reaching. Indeed, it is in some ways the heart of monastic life, because both obedience and stability can be seen to be a part of this conversion of life. In this sense, the monastic vows are the fulfillment of St. Paul's admonition in Romans chapter 12:

I BESEECH you therefore, brethren, by the mercy of God, that you present your bodies a living sacrifice, holy, pleasing unto God, your reasonable service. And be not conformed to this world; but be reformed in the newness of your mind, that you may prove what is the good, and the acceptable, and the perfect will of God.

The people of St. Benedict's time would expect to drink wine...it was often the only way of drinking uncontaminated drink, especially after the disapperance of the Roman administration following the collapse of the Empire. Nevertheless, St. Benedict knew that it was all too easy to take too much wine, and that this would inhibit the life of Christ and the community for the monks. So this small amount (two glasses really) of wine per day is the allotment for well-off monasteries. Poorer ones are to go without, but most importantly, without grumbling.
This is of course, the key idea in St. Benedict's rule: that we are to be grateful for the grace of God, not grumbling about what we don't have. That grumbling may be just as much a part of human life as making mistakes, but we are supposed to learn from the example of the Israelites who left Egypt, but grumbled about the onions and garlic they left behind. Unfortunately, we all too often imitate those ancient children of Israel too closely.
Posted by Steve Cavanaugh at 11:17 AM No comments:

Let's return to the Rule of St. Benedict, to see what wisdom it contains about eating.

Chapter 39: Of the Quantity of Food
Making allowance for the infirmities of different persons, we believe that for the daily meal, both at the sixth and the ninth hour, two kinds of cooked food are sufficient at all meals; so that he who perchance cannot eat of one, may make his meal of the other. Let two kinds of cooked food, therefore, be sufficient for all the brethren. And if there be fruit or fresh vegetables, a third may be added. Let a pound of bread be sufficient for the day, whether there be only one meal or both dinner and supper. If they are to eat supper, let a third part of the pound be reserved by the Cellarer and be given at supper.
If, however, the work hath been especially hard, it is left to the discretion and power of the Abbot to add something, if he think fit, barring above all things every excess, that a monk be not overtaken by indigestion. For nothing is so contrary to Christians as excess, as our Lord saith: "See that your hearts be not overcharged with surfeiting" (Lk 21:34).
Let the same quantity of food, however, not be served out to young children but less than to older ones, observing measure in all things.
But let all except the very weak and the sick abstain altogether from eating the flesh of four-footed animals.

Each monk is allotted, per day, one pound of bread (to be split between the two meals on days when two meals are served), and one cooked dish, although fresh fruits and vegetables can also be served when in season. No “meat”, that is, no beef, veal, pork, lamb, or mutton except for the sick and convalescing. The foundation of the daily diet is, naturally enough, bread, the “staff of life.”
What would those cooked dishes have been? Well, pasta wasn’t invented yet, rice was unknown in Italy at this point, and neither potatoes nor corn (maiz for non-US English-speakers) hadn’t been brought back to Europe yet. So dishes could have been made with barley, buckwheat, millet, fava beans, lentils or garbanzos. (Most of our beans such as kidney, pinto, and green beans were also unknown in Europe at the time of Benedict. These all came to Europe, along with peppers, tomatoes, squash and pumpkins, not to mention chocolate, from the Americas after Columbus.)
This diet would have, no doubt, seemed especially bland to modern-day Americans, used as we are to a diet enriched by foods and cuisines from all over the world. But the diet Benedict laid out was one that was sufficient for a person’s daily needs, and even looked out for taste (hence the requirement of two cooked dishes) as well as for the differing needs of the sick and of children.
Posted by Steve Cavanaugh at 10:16 PM No comments:

The New York Times food blog has an interesting item titled "The 11 Best Foods You Aren't Eating". The foods they list are:

The idea behind the list is that many times, as was the case with the two books I recently read by Michael Pollan (The Omnivore's Dilemma and In Defense of Food) the easy critique of the "industrial" eating that contemporary Americans have taken on isn't joined to simple advise on how to direct your diet in a more healthful direction.
One of Pollan's points was that in the past culture helped pass on healthful diets (at least as an ideal...of course, in preindustrial societies, famine was a real possibility at times); and that "culture" in most cases meant "Mom". In contemporary society, mothers rarely have the leisure to cook properly, and so are not passing along much in the way of accumulated wisdom. Nor do children learn how to cook from their mothers, and so we need to reforge the broken chain of food culture.
So in the Times' list there are many foods that are healthful, easy to find; they should be items commonly found in most kitchens. We use all of these regularly in our kitchen, except for Pomegranate juice. Canned pumpkin is great, not only in pies, but in rolls. Prunes are great too--we've got a fabulous spice cake that uses stewed prunes in it. We've got Swiss Chard and Blueberries in the garden. And I've liked canned sardines ever since my father introduced me to them at the bar in the Old Colony Yacht Club when I was but a "wee lad". Cinnamon is used in so many recipes, Indian foods, chili, baked items, and mixed with sugar as a topping for French toast; turmeric is an essential in Indian recipes, and one in particular that we like is cauliflower.

melt the butter in a heavy, large skillet or dutch oven under medium-high heat. Heat the cumin seeds in the butter, then add the turmeric and salt. Finally, add the cauliflower, stirring and turning so that it is covered in the butter and spices. Add 1/4 cup of water and cover for 3-4 minutes. Uncover, stir and serve.

Taking a second look at the list, I notice that all the items, except the Pomegranate juice, are among the less expensive items you might pick up on the grocery list, the vegetables especially when they're in season. Foods that pack a powerful nutritional wallop needn't be out of the reach of the poor. Among the "ethnic poor" I've visited over the years, there seems to be a storehouse of traditional recipes which are heavy on plant foods and rice, and which can be very healthful. But in the houses of the poor "natives", that culinary culture isn't usually in evidence, and the foods that they rely on are the kind that contribute to poor health. Because no matter what your culinary culture, you only buy what you can afford, and refined carbohydrates are cheap. In the past we've printed and distributed a brochure based on info from Bob Waldrop's "Better Times Cookbook" to help folks figure out a better way of buying food, but even that can't overcome the problem created by the gap in cultural food transmission that is evident.
Posted by Steve Cavanaugh at 12:39 PM No comments: