Another cold, rainy late February night last night. So, to help warm things up, and help my wife Laurie clear her sinuses, I thought I'd experiment and try a spicy shrimp soup.

Put the shrimp and 3 cups of water in a sauce pot to boil.

When the shrimp is done, drain the water but save it...this will be the stock for the soup.

While this is simmering on low heat, peel the shrimp and toss in a bowl with the BBQ rub. After the soup has been simmering about 12 minutes, put in the shrimp and let simmer another 5 minutes or so. Add in the minced cilantro.

Serve this with bread and a salad. 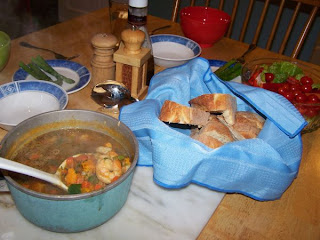 Posted by Steve Cavanaugh at 8:33 AM No comments:

Our usual fare during Lent has become soup and bread suppers, since I started following the older Latin and current Eastern discipline of removing not only meat but also dairy and eggs from the menu during Lent. In a shocking concession to weakness, I have, after the first go at it 3 or 4 years ago, allowed oil (but not olive oil) in the kitchen during this season, but the flesh is weak.

For the past year and a half, I've been meeting on Monday nights, when my wife is working a late shift, with my organist friend Fred for supper and vespers. And last Fall we included a new companion, Robert, in our weekly meals and prayer. So, this week they got treated to a typical Lenten meal, Canadian Split Pea Soup with bread and salad. I cheated on the bread, and used a garlic cibatta loaf from the local supermarket, but the soup is home-made, from a recipe in the Horn of the Moon cookbook. 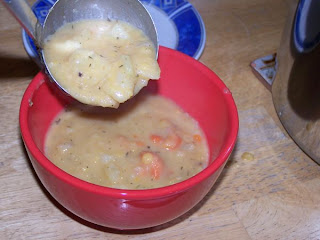 Bring water to boil in a 4-quart soup pot. Add split peas, lower heat to a simmer, and cover loosely. Cook, stirring occasionally, for 1 hour, until split peas are tender.
Meanwhile, set a 10-inch fry pan over medium heat. Add oil and when hot, add the garlic, onions, carrots, celery, and thyme. Sauté until tender. Add sautéed vegetables, potato and turnip to the cooked peas; continue to simmer. Add the salt, vinegar, pepper, and parsley. Cook the souop 30 minutes more, covered, stirring occasionally, until the vegetables are tender and the peas have dissolved.
Posted by Steve Cavanaugh at 8:28 AM 1 comment:

Shrove Tuesday
Our family has been keeping the tradition of pancakes for supper on the night before Ash Wednesday for many years. Even though all the children are away from home now, Laurie and I still kept up the tradition this year. Since we could indulge our more adventurous tastes, I made baked apple & pecan pancakes, based on a recipe from The Inn Cookbook. 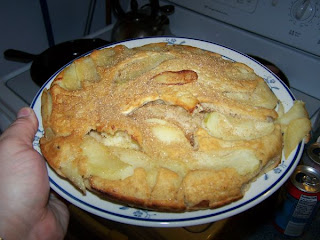 heat a cast iron skillet on the stove, add 2 Tablespoons butter, and brown half the apple slices. Add half the batter, then pop in the oven for 7 minutes. At the end of the 7 minutes, turn out on a plate, then slide back in the pan to cook on the other side for another 6 minutes.

If you have two cast iron skillets, you can do both pancakes at once. Otherwise, put the finished pancake on a warming plate and cook the second one.

Sprinkle the finished pancake with brown or demerara sugar and serve with maple syrup.

We added Canadian Bacon to the meal in honor of the Olympics this year : )

And that will be the last of eggs I eat until Easter!
Posted by Steve Cavanaugh at 9:14 PM No comments: