The beginning of the Great Fast

Many people think of Lent as a time for "giving up" something, as a time of sacrifice, in the sense that a sacrifice is giving up something. And so, over the past week, I have heard or seen references to the Lenten fast ranging from my mother-in-law (who is not Catholic and has not attend church for years) joke about giving up something to a cartoon in which there's an exclamation emerging from St. Peter's, Rome, shouting "You're giving up WHAT for Lent?". 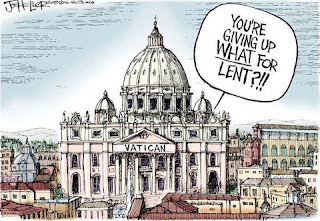 St. John Chrsysostom writes: "† Fasting is a medicine. But like all medicines, though it be very profitable to the person who knows how to use it, it frequently becomes useless (and even harmful) in the hands of him who is unskillful in its use.
For the honor of fasting consists not in abstinence from food, but in withdrawing from sinful practices, since he who limits his fasting only to abstinence from meats is one who especially disparages fasting.
Do you fast? Give me proof of it by your works. If you see a poor man, take pity on him. If you see an enemy, be reconciled with him. If you see a friend gaining honor, do not be jealous of him. And let not only the mouth fast, but also the eye and the ear and the feet and the hands and all members of your bodies."

Recently my daughter Molly received a diagnosis of celiac disease. As you might know, this is an autoimmune disorder in which the body becomes unable to digest gluten, a type of protein found in wheat, rye, barley and spelt. The presence of gluten can lead to inflammation in the bowels and to all sorts of problems with the digestive tract, and the only solution known at this time is to completely eliminate gluten from the diet.

This is a good illustration of what fasting is: An elimination of food for the sake of health. The practice of non-gluten eating is really a re-ordering of how a person eats and so is not just a giving-up, but a whole new way of eating. Fasting should likewise be a whole new way of living, and for the sake of health (keeping in mind that in Latin salus means not only health but salvation).
Posted by Steve Cavanaugh at 11:37 AM